Testimony of Miracle Divine Healing of Meekness in Zimbabwe

Originally written July 12, 2018. All Glory to The Father in Jesus Name!

On April 11, 2018, a man named Meekness who lives in the nation of Zimbabwe, in Africa, was tested for tuberculosis (TB). Later, on April 25, he was diagnosed with tuberculosis. He was told that there was a very large amount of bacteria in his body. It would take 6 months of antibiotics to be healed of this amount of tuberculosis bacteria. During this same time, Meekness was searching for the truth of Jesus Christ and reading the website of I Saw The Light Ministries and was in contact with Pastor Zimmerman of this ministry. On June 26, 2018 Meekness was tested again for the amount/level of bacteria in his body. On July 1, 2018, Meekness was baptized via full immersion of water in Jesus Name, and in The Holy Ghost of Jesus, via Pastor Zimmerman in the United States, via the internet, while Meekness dunked himself in water in Zimbabwe. Praise Jesus! The very next day, Meekness returned to the doctors for the latest test results and was declared healed of tuberculosis! His test results showed that he was no longer positive for the TB bacteria!
You can see from the pictures below that he was registered with the tuberculosis treatment program on April 25. It says he was diagnosed on the 11th. That's when he was first tested, and then given the diagnosis on the 25th. He wasn't registered until the 25th. His first treatment of antibiotics was given on April 25th. The time between April 25 and July 2 was less than 10 weeks. But the doctors had told him that his level of bacteria would require 6 months of treatment, which would be 26 weeks! You can see from the paperwork below that his bacteria level was high. Although some mockers/unbelievers would try to claim that he was healed only by medicine, the very evident and scientific proof is that his bacteria level was high, which means that less than 10 weeks of antibiotics would not have resulted in the final test result of not having tuberculosis bacteria! A simple search on the internet will tell you that at least 6 months of treatment is required for TB. That is standard! It's extremely clear that brother Meekness was divinely healed in a miracle by Jesus, and probably on the very day of his baptism. Above: Close up on the page that shows that his bacteria level was high on the first day of diagnoses. 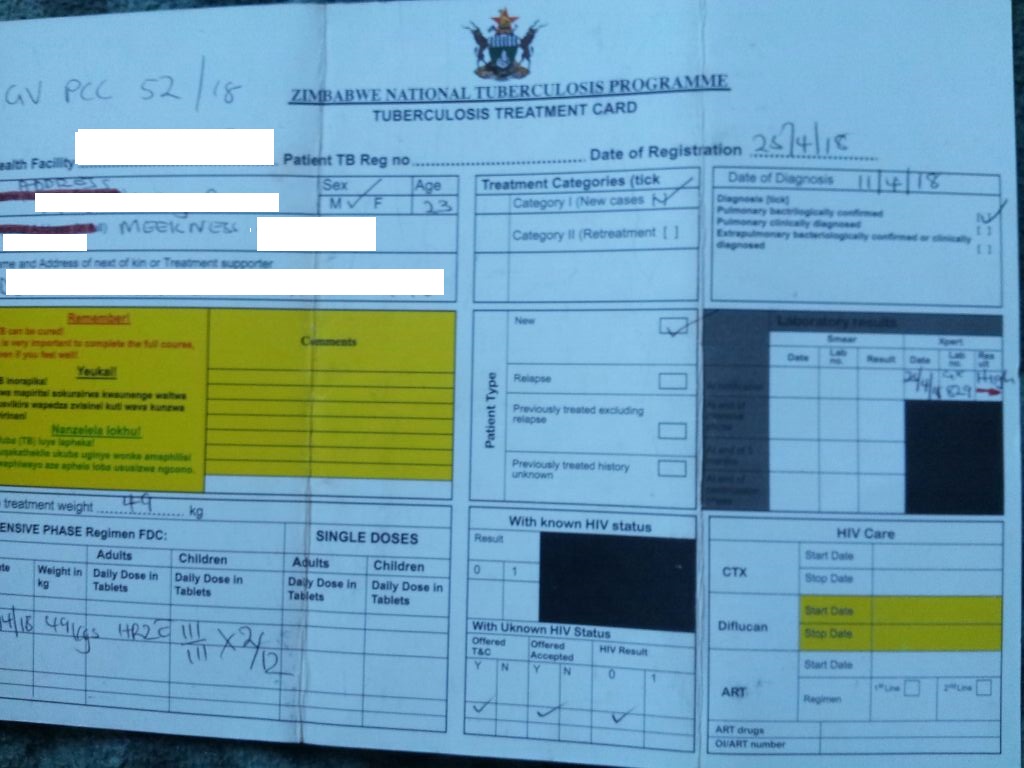 Above: Proof of his date of registration on April 25. And first medicines given or prescribed on that same date. Above: Proof his lab results (which was taken on June 26, only 2 months after diagnoses) shows that he no longer tests positive for TB. Notice in the bottom right corner in the section "Smear Result" and "Positive", it is stamped "NO".

2 Kings 5:1-14 (NASB)
:1 Now Naaman, captain of the army of the king of Aram, was a great man with his master, and highly respected, because by him the Lord had given victory to Aram. The man was also a valiant warrior, but he was a leper.
2 Now the Arameans had gone out in bands and had taken captive a little girl from the land of Israel; and she waited on Naaman’s wife.
3 She said to her mistress, “I wish that my master were with the prophet who is in Samaria! Then he would cure him of his leprosy.”
4 Naaman went in and told his master, saying, “Thus and thus spoke the girl who is from the land of Israel.”
5 Then the king of Aram said, “Go now, and I will send a letter to the king of Israel.” He departed and took with him ten talents of silver and six thousand shekels of gold and ten changes of clothes.

6 He brought the letter to the king of Israel, saying, “And now as this letter comes to you, behold, I have sent Naaman my servant to you, that you may cure him of his leprosy.”
7 When the king of Israel read the letter, he tore his clothes and said, “Am I God, to kill and to make alive, that this man is sending word to me to cure a man of his leprosy? But consider now, and see how he is seeking a quarrel against me.”

8 It happened when Elisha the man of God heard that the king of Israel had torn his clothes, that he sent word to the king, saying, “Why have you torn your clothes? Now let him come to me, and he shall know that there is a prophet in Israel.”
9 So Naaman came with his horses and his chariots and stood at the doorway of the house of Elisha.
10 Elisha sent a messenger to him, saying, “Go and wash in the Jordan seven times, and your flesh will be restored to you and you will be clean.”
11 But Naaman was furious and went away and said, “Behold, I thought, ‘He will surely come out to me and stand and call on the name of the Lord his God, and wave his hand over the place and cure the leper.’
12 Are not Abanah and Pharpar, the rivers of Damascus, better than all the waters of Israel? Could I not wash in them and be clean?” So he turned and went away in a rage.
13 Then his servants came near and spoke to him and said, “My father, had the prophet told you to do some great thing, would you not have done it? How much more then, when he says to you, ‘Wash, and be clean’?”
14 So he went down and dipped himself seven times in the Jordan, according to the word of the man of God; and his flesh was restored like the flesh of a little child and he was clean.

Mark 16:16-20
:16 "He who has believed and has been baptized shall be saved; but he who has disbelieved shall be condemned.
17 These signs will accompany those who have believed: in My name they will cast out demons, they will speak with new tongues;
18 they will pick up serpents, and if they drink any deadly poison, it will not hurt them; they will lay hands on the sick, and they will recover."
19 So then, when the Lord Jesus had spoken to them, He was received up into heaven and sat down at the right hand of God.
20 And they went out and preached everywhere, while the Lord worked with them, and confirmed the word by the signs that followed.

Click here to learn about the biblical requirement to be baptized for salvation and the forgiveness of your sins.

This is only one example of many miracles that we see on a constant basis here at I Saw The Light Ministries.

Testimony of Miracle Divine Healing of Meekness in Zimbabwe. Copyright 2018 I Saw The Light Ministries