Fulfillment of March 14, 2008 & Foreshadowing of WW3, Bashar Assad and Pope Francis I

Starting in 2006, You were told in advance to watch "March 14" here at "I Saw The Light Ministries", & on a Christian forum discussion board and in our weekly Sabbath services.

In early 2006, I had been going to a certain business every week. The man that ran the business always had the television set on. It was always on either the news or the weather. Nothing else. Always news or weather. Well, one day unexpectedly the television was on a basketball game. The score was 14-14. I thought it was interesting that the game had a tie score and that it was a basketball game instead of news or weather. But I really didn't think too too much about it but I did take notice. Then, I went across the street to another business. They also had the same basketball game on the television. The score was still 14-14.
Then later that night, I asked God where should I read in my bible. He said "Matthew". So I started in Matthew chapter 1. Then I came to verse 17.
"So all the generations from Abraham to David are fourteen generations; and from David until the carrying away into Babylon are fourteen generations; and from the carrying away into Babylon unto Christ are fourteen generations".

In that verse, you have 3 "14"s. That represents the date 3-14 or March 14. It also represents 3x14 = 42 months of Revelations. But it is not saying the 42 months begin with March 14, no it is not saying that. The related signs included "basketball", "weather" and "news". I posted online that God had showed me "March 14" but with no year. I posted the information about the basketball game, the weather and the news. I did not understand what it all meant. I did not proclaim that an event would hit on March 14, 2006. I did not know whether it would or would not happen that year. 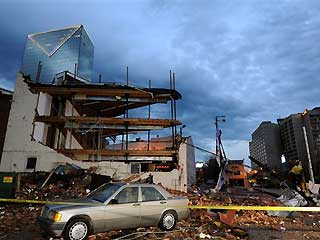 Today's tornado in Atlanta, while not as bad as many of the storms that plaque our nations, arises another warning to the human race to repent. The Tornado (weather) hit CNN News World headquarters (remember that "news" was one of the clues) and the Georgia Dome where a basketball game was playing at the time. Remember that basketball was another clue.

See these three very dramatic videos, which I did not make! This shows you that others considered the event as very significant!
Video #1 below:

UPDATE: Why God showed me March 14, 2008 Atlanta Tornado
Ever since the March 14, 2008 Atlanta Tornado, I have always wondered why did God show this to me in advance?
So now in Feb/March 2013, God has now answered that question!
In recent months, God has taught me, that in the bible, the Assyrian Anti-Christ, Son of Perdition, is represented by storms. Isaiah 7:8 is same as Rev.13:3,
Isaiah 7:17-19, the word "bee" in verse 18 is referring to Tropical Storm Debby 2012. The word "rest" refers to the storm stalling in the Gulf of Mexico. The word "valleys" refers to a gulf of troubled desolate waters. The Gulf of Mexico fits that description ever since the so-called Gulf Oil "Spill".
Isaiah 8:6-8 again shows the king of Assyria, Bashar Assad, represented by storms. Will you please now turn in the pages of your paper bible (not the internet) to these scriptures? Thanks!

The March 14 Alliance/Coalition
Now, God has also shown me that there is a coalition of anti-Assad people known as the March 14 Coalition! That is based in Lebanon but is involved in the on-going war in Syria. It was named after the March 14, 2005 protest against Assad within Lebanon. But the alliance is not named the March 14, 2005 coalition, but rather just simply the March 14 coalition or alliance. Remember, that God had not originally given me any year, but just "March 14".

March 15, 2009 Civil War officially starts in Syria
While the trouble had already started somewhat in Syria before 2009, March 15th has become the official start date of the so-called "civil war" in Syria. Therefore, March 14th would then be considered the last day before the war broke out.

Trinity Clues
Matthew 1:17 said "14" three times.
There was the first television, the 2nd television, then the bible verse. 3 signs.
There was the "weather", the "news" and the "basketball game" clues to the march 14th prophecy. 3 clues.
There was the Atlanta Tornado of March 14, 2008, the protest of March 14, 2005 in Lebanon and then thirdly, the March 14, 2009 last day before the civil war in Syria.
The repeat of "3"'s in this prophecy refer to the trinity doctrine which is very much connected with Bashar Assad. The trinity doctrine is the foundation and capstone for the one world religion of Chrislam/Alawi sect of Bashar Assad.

The Ultimate Meaning of the March 14 Prophecy
The ultimate Assyrian Anti-Christ Storm is brewing upon America. Soon, war will break out in the middle east. The war will be between Syria/Iran/Russia/China and Israel/Jerusalem/Europe/England/NATO/America. The Nazi/Islamic/Communist (666) 10 toe confederation led by the son of perdition (Bashar Assad) and Gog (Putin) will successfully invade and conquer Israel and Jerusalem. The war will spread across Europe. At some point of time, early or later, China and Russia will attack USA. China and Russia will successfully invade and conquer USA. They will do so under authority of the son of perdition (anti-Christ) Bashar Assad of Syria. The Assyrian storm will flood America with her armies. It will hit Atlanta and the rest of America like a Tornado. Some people will be picked up and carried away to distant lands for slave labor. After the people repent, God will bring some people back to their home lands.

Beware of the Assyrian storms! These storms represent the coming Chinese, Russian, Iranian invasion of Israel, Australia, England and America!

On March 14, 2013, a major date in History, Jorge Bergoglio's first full day as pope, Bashar Assad sent a cable to Pope Francis congratulating him as new pope.
Soon, Assad and Francis will stand together as the two men of the anti-Christ and false prophet!

The problem is that most people don't think they need to repent. They refuse to hear the Word of God just as in the day of Jeremiah when he prophesied the destruction and invasion of his country. You want to hold onto your traditions and customs of mankind instead of obeying God. You must get rid of your idols of movie stars, rock stars, sex, money, greed, porn, horror movies, pagan holidays (Christmas, Easter) and abortion. You must stop all the pillow talk technique of loving the abortion people and actually step up to the plate and tell the people their sins so they know for sure what to do and that they realize it's serious business. This is not a game. And you don't have time to waste. Get busy now proving all things and cleaning up your life, house, business, temple, church, beliefs, heart and mind. Get right with God now! Repent for the day of tribulation are starting very soon!

Additional videos of the implosion, but not blocked by the bus.

Update: The Prophecy is to Be Fully Fulfilled 14 Years After the First Fulfillment

On March 16, Jesus gave me a prophetic dream of a news report on television showing that a large earthquake had hit Los Angeles and that buildings were burning. Later the same day, Jesus gave a powerful confirmation to the entire world via a huge explosion of fireworks in the same region. Two men died in the explosion and one of the men was named Caesar which is in relation to other prophecies that Jesus has given us. I now believe that an earthquake of the magnitude of 7.0 - 7.2 or larger will hit Los Angeles. I think between the date of the strong delusion and the date of the Gog/Magog invasion. This timeframe is my educated guess. The timeframe is not necessarily "thus saith THE LORD." But I know that Jesus gave me the dream of a large earthquake hitting L.A., resulting in many fires.

All glory to God, I know nothing of myself