Revelation 2:12-17 King James Version (KJV)
12 And to the angel of the church in Pergamos write; These things saith he which hath the sharp sword with two edges;
13 I know thy works, and where thou dwellest, even where Satan's seat is: and thou holdest fast my name, and hast not denied my faith, even in those days wherein Antipas was my faithful martyr, who was slain among you, where Satan dwelleth.
14 But I have a few things against thee, because thou hast there them that hold the doctrine of Balaam, who taught Balac to cast a stumblingblock before the children of Israel, to eat things sacrificed unto idols, and to commit fornication.
15 So hast thou also them that hold the doctrine of the Nicolaitanes, which thing I hate.
16 Repent; or else I will come unto thee quickly, and will fight against them with the sword of my mouth.
17 He that hath an ear, let him hear what the Spirit saith unto the churches; To him that overcometh will I give to eat of the hidden manna, and will give him a white stone, and in the stone a new name written, which no man knoweth saving he that receiveth it.

Who are the Nicolaitanes?
Rev. 2:15 "Nicolaitanes", from Greek 3531 Nikolaites, a follower of Nikolaus.
Nikolaos is G3532 which means "victory over the people" or "to conquer people".
Nikolaos is from two Greek words: G3534/Nikos/to conquer/victory and G2992/laos/people, especially your own people.
Names stemming from "Nike" include amongst others: Nicholas, Nicola, Nick, Nicolai, Nikolai, Nicolae, Klaas, Niki, Nikita, Nika and Niketas.
The Nicolaitanes were people who claimed to be Christian yet they compromised with the pagan gods and goddesses of Pergamos including Nike. They were known for their fake piety such as public prayer. Nike is the Greek goddess of victory & conquest whose function was to proselytize/evangelize for Zeus of Pergamos. She crowned, with laurel, the winners of games and war. There were statues and coins of Nike in Pergamos. At the time of writing this, the entry in Webster's International Dictionary under the heading Zeus had a picture of Zeus sitting on a throne with Nike in back of him, in the act of putting a crown of laurel upon his head. The crown of laurel is directly related to the white horse/first seal of Revelation chapter 6. Nike was very much associated with the Olympic games and the victories there. Of course, victory is associated with prizes. 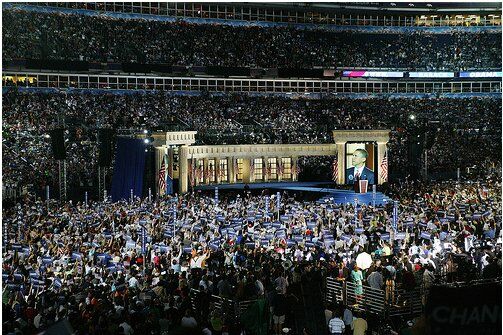 Model of the Pergamon Altar at the Denver Broncos Stadium (Sports Authority Field at Mile High/Invesco Field), August 28, 2008 when Obama accepted the democratic nomination to run for President. 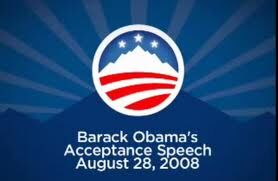 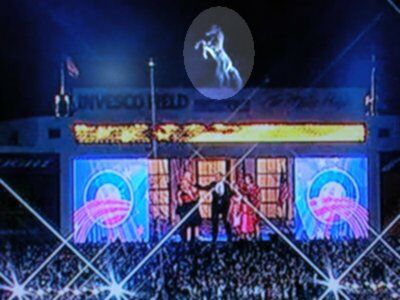 Notice above right, the white horse/Denver Broncos Mascot statue behind Obama, the white horse is known as "thunder", Also known in Islam as "Al-Buraq", also known in Greek mythology as "Pegasus". Greco-Roman poets write about Pegasus's ascent to heaven after his birth and his obeisance to Zeus, who instructed him to bring lightning and thunder from Olympus.

A woman actually rides a real white horse when home games are played in their Denver stadium. Pegasus appears on coins of Corinth from 500 to 430 B.C., and from 350 to 338 B.C., and 200 years thereafter, on the decadrachma, complete and with wings; as well as on coins of Lampsacus, Scepsis, and Carthage, on these last with the asterisk of the sun, or with the winged disc, and the hooded snakes over its back. It is also shown on a coin of Narbonne as a sectional winged figure, and as a winged horse on a Euphratean gem, with a bull's head, a crescent moon, and three stars in the field. Of course the crescent is an Islamic symbol. Notice the three stars in the Obama logos. Other ancient coins of Ancient Greece, Pergamon, Mysia, 88-50 BC. show the Head of Athena in crested Athenian helmet ornamented with Pegasus and the serpent of Aesklepius. Some of the other ancient coins show the connection of Islam, ancient Greece, Pergamos, and Pegasus. Please see the 4 Horsemen article to better understand the horse connection. 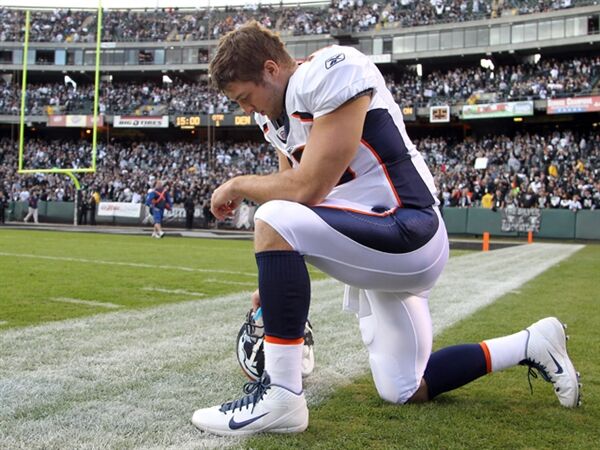 Tebowing/Genuflection/Bowing on one knee, a pagan practice

The practice of "genuflection", of bowing on one knee, is a pagan practice. Christians submit to God on both knees.
Proof of Pagan Origin: I encourage you to actually look at these references:
http://www.thechurchesofgod.com/Good%20Old%20Time%20Religion.htm
http://en.wikipedia.org/wiki/Genuflection
Zeus: a journey through Greece in the footsteps of a god
Airman's Medal Factsheets
Catalogue of casts, Reliefs from Pergamon
The Encyclopedia Britannica: a dictionary of arts, sciences ..., Volume 19, Numismatics
Star tales, Hercules
http://en.wikipedia.org/wiki/Huh_(god)
http://en.wikipedia.org/wiki/Atlas_(mythology)
Greek pottery from the Iberian Peninsula: archaic and classical periods, Nike, Ribbons and crowns
Making Over Mr. Right
Ancient Egypt god Geb
Pseudo-Hyginus, Astronomica 2. 6 :Constellation the Kneeler

Christians on Both Knees
Are you a one knee Christian or a two knee Christian?
Do you serve the Lord half-heartedly, or fully?
1 Kings 8:54 And it was [so], that when Solomon had made an end of praying all this prayer and supplication unto the LORD, he arose from before the altar of the LORD, from kneeling on his knees with his hands spread up to heaven.

1 Kings 18:42 So Ahab went up to eat and to drink. And Elijah went up to the top of Carmel; and he cast himself down upon the earth, and put his face between his knees,

Ezra 9:5 And at the evening sacrifice I arose up from my heaviness; and having rent my garment and my mantle, I fell upon my knees, and spread out my hands unto the LORD my God,

Isa. 45:23 I have sworn by myself, the word is gone out of my mouth [in] righteousness, and shall not return, That unto me every knee shall bow, every tongue shall swear.

Daniel 10:10 And, behold, an hand touched me, which set me upon my knees and [upon] the palms of my hands.

Ephesians 3:14 For this cause I bow my knees unto the Father of our Lord Jesus Christ,

Romans 14:11 For it is written, [As] I live, saith the Lord, every knee shall bow to me, and every tongue shall confess to God.

Tim Tebow Signs Endorsement Deal with Nike He doesn't just wear Nike clothes. He sponsors Nike or Nike sponsors him. Whichever way you look at it, he supports Nike, the pagan company. 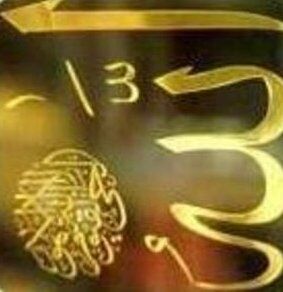 Nike also put the entire name of Allah on their shoes http://www.mobixone.com/islamic-sms/boycott-nike-puma-wrote-the-name-of-allah-on-shoes/ 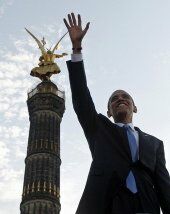 Obama gave a speech under the statue of Nike in Germany July 24, 2008.

Obama nominates another Nike exec, McCray, to federal board! 2011 http://www.bizjournals.com/portland/news/2011/05/25/obama-nominates-former-nike-exec-to.html 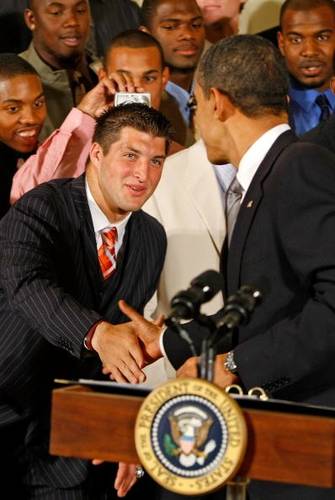 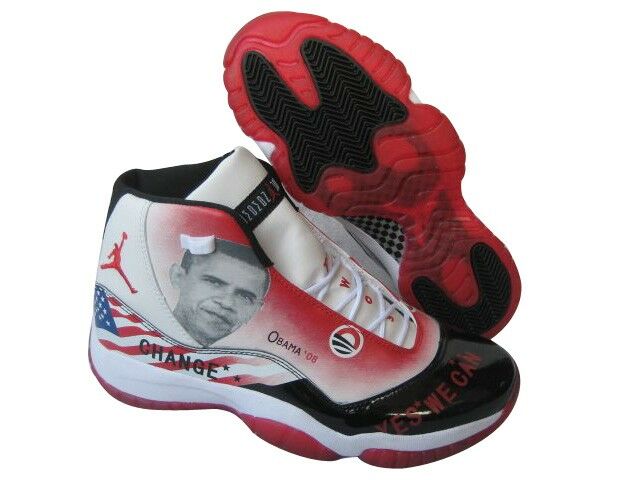 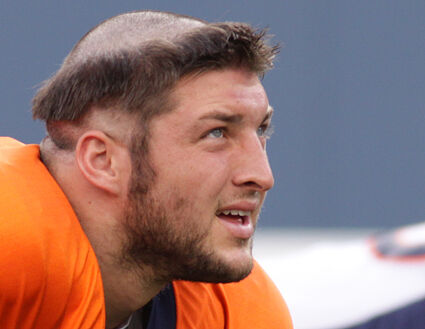 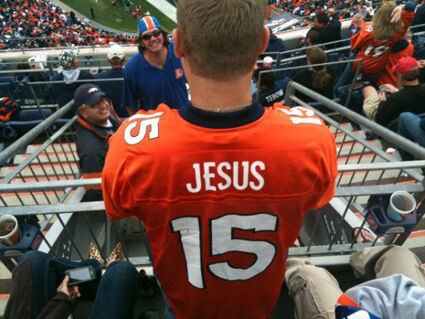 The Theology of Nike

One of Tim Tebow's favorite books is "The Purpose Driven Life​" by Rick Warren​, the apostate preacher who delivered the invocation at Obama's inauguration.

Most people will say that Tebow means well and has no knowledge/understanding of the paganism of Nike. This may be true, but that doesn't make it right. The hypocrites and pagans/heathens of Matthew 6 and the Pagan Christians/Nicolaitanes of Revelation 2 were also very religious people. They also prayed. But the fact is that they prayed openly in the same fashion that Tim Tebow is praying openly, to be seen of men. The White Horse of Revelation Chapter 6 also looks holy, but it goes out in the Spirit of Victory/Conquest. Obama also claims to be Christian but is very clearly an pro-abortion, pro-homosexual, antichrist Islamist. Currently, people are flocking around Tim Tebow and Obama like they are Messiahs. Soon, people will flock to the antichrist because of the miracles that the false prophet (who will claim to be Jesus) will perform. They also will appear Holy to many people. Tebow bows on one knee in submission to his sponsor, Nike, the goddess of victory. Who is helping Tebow to win games? God almighty or Nike the goddess of the Olympic games? The feminist spirit of Athena and Nike is overtaking America. Please pray again now, and then read the following related articles that continue to put together the pieces of the puzzle. You cannot completely understand the fullness of the above article without reading the following related articles.

Related Articles:
The 4 Horsemen Revealed
The Swastika, Obama and the Palestinian Movement

After reading the related articles, I encourage you to please pray again and go on a fast to seek the Lord's Will concerning your reaction to this revelation. May God bless you in amazing ways!

Our online newsletters are located at http://proveallthings.weebly.com (Be sure to click on both "blog" and "current breaking news".)
But when you subscribe via email, you will be notified immediately of updates/edits to the website, new articles, important breaking news as it relates to bible prophecy being fulfilled, major earthquakes and heavenly inspirations, etc. Our newsletter will keep you informed of prophetic world events as well as ministry updates.
Low message volume. Your email will not be overloaded with junk messages. You may cancel and unsubscribe at anytime.
We do not sell or share your information with anyone.
Click here to subscribe to our newsletter notifications mailing list.