This information should not be abused to wage hate against the Jewish people. There are good Hebrew/Jewish people who have accepted Jesus Christ as their Savior. All races are of one blood and everyone descends from Adam and Eve and all peoples are created by the same Almighty Creator. I, personally, do have Jewish ancestry on my dad's side of the family. So this article is not based upon racism or hate. However, there are people in every race who have been deceived and led to accept pagan practices. For many years, I proclaimed that the "Star of David" was acceptable and holy because I did not yet see the evidence for it. But now, I have the evidence and proof! So now, I have repented and must now warn others.

Amos 5:26-27 The Greek Septuagint
26 Yea, ye took up the tabernacle of Moloch, and the star of your god Raephan, the images of them which y made for yourselves.
27 And I will carry you away beyond Damascus, saith the Lord, the Almighty God is his name.

Acts 7:39-43 King James Version (KJV)
39 To whom our fathers would not obey, but thrust him from them, and in their hearts turned back again into Egypt,
40 Saying unto Aaron, Make us gods to go before us: for as for this Moses, which brought us out of the land of Egypt, we wot not what is become of him.
41 And they made a calf in those days, and offered sacrifice unto the idol, and rejoiced in the works of their own hands.
42 Then God turned, and gave them up to worship the host of heaven; as it is written in the book of the prophets, O ye house of Israel, have ye offered to me slain beasts and sacrifices by the space of forty years in the wilderness?
43 Yea, ye took up the tabernacle of Moloch, and the star of your god Remphan, figures which ye made to worship them: and I will carry you away beyond Babylon.

Did you read the above scriptures in your personal paperback/hardback bible today or just only on this website?
If only online, I encourage you to please open your bible and read these verses both on our website and in your bible. There is power in reading the real bible. Also, did you pray before beginning to read about this specific subject today? If not, I encourage you to take the time now to pray for understanding of truth.

The bible tells us that Israel embraced a demonic star!
Research shows that "Remphan" in verse 43 was an ancient Assyrian god (demon).
The Hebrews forsook the true Creator and embraced the Assyrian gods including Remphan. This fact is in the bible and in history!
The Star of David also known as the "Magen David" or the "Hexagram" is world known by witches and satanist as one of their own symbols. Notice on this link, the person sells satanic jewelry including freemasonry jewelry and the Baphomet and the Star of David (not always in a circle).

All 22 Letters of the Aramaic/Assyrian/Babylonian Alphabet are found in the "Star of David"! Plus the 2 "final letters" also! These are not Hebrew letters. They are Syrian Aramaic, the language of Babylon. See proof. The star is completely Assyrian/Babylonian.
I am not antisemitic! In fact, I am part Jewish by blood. But the fact is that the so-called Hebrew alphabet is not Hebrew. It is Aramaic. Archeology also connects the "Star of David" with Yah, the Egyptian Moon god also known as Allah. To understand this and to see total proof of what I have already claimed, you need to read this link about the well documented history of the Babylonian influence upon the Israelites.

The images below show the Babylonian Assyrian Aramaic Alphabet in relation to the so-called star of David. 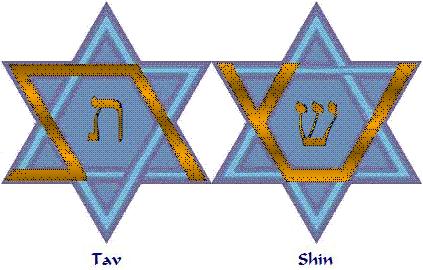